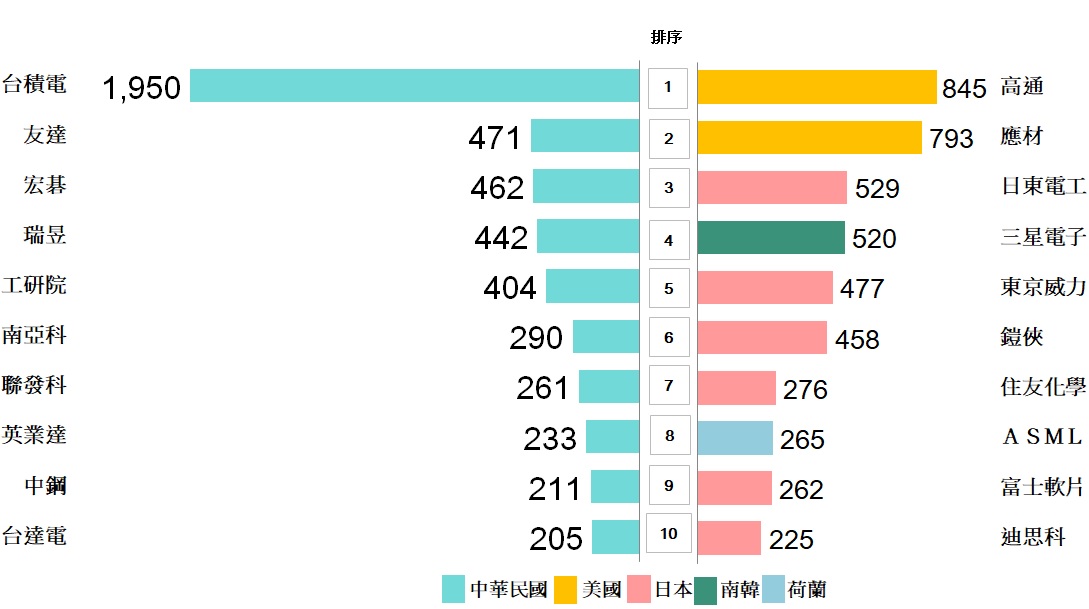 According to TIPO’s 2021 Statistical Rankings for Patent Applications and Grants, TSMC was the top domestic applicant for invention, utility model, and design patents, with 1,950 applications filed. The company has held on to its lead for the sixth consecutive year now. As for foreign applicants, Qualcomm claimed the top spot for the second year in a row, having filed a total of 845 applications. With respect to the number of patents granted for all three patent types, TSMC led the pack for domestic applications (1,053 patents granted), and Applied Materials was the most successful foreign applicant (492 patents granted). Invention patent applications by domestic corporations and research institutions of the top 100 went up by 17% and 11% respectively.

As regards domestic applicants, TSMC has consistently filed the most applications since 2016. In 2021, that number surged by 78% to 1,950 cases, followed by AU Optronics (471 cases). Realtek Semiconductor (442 cases) and Nanya Tech (290 cases) each filed their highest number of applications ever, coming in fourth and sixth, respectively. Delta Electronics moved back into top 10 with 205 applications (+18%) (Table 1).

Five research centers were also among the top 100 domestic applicants for patents of any type. Placing fifth in the overall rankings was the Industrial Technology Research Institute with 404 applications. Behind it was the Metal Industries Research & Development Centre (89 cases) (Table 5).

As for the top 10 foreign applicants, Qualcomm remained at the top with 845 patent applications, marking an increase of 17%. Altogether, there were four semiconductor equipment manufacturers in the top ten: Applied Materials (793 cases), Tokyo Electron (477 cases), and DISCO (225 cases) came in second, fifth and tenth, respectively. In addition, ASML (265 cases) filed its highest number of applications and moved up to number eight. Samsung Electronics ranked fourth with 520 cases, marking the highest growth rate of 98% among the top 10 (Table 2).